On 22 January 1879 at Rorke’s Drift, Lieutenant John Chard cast aside his technical duties as a Royal Engineer and took command of close quarter combat for the first time in his life. In doing so he won the VC, tea with Queen Victoria and was lionised by the British press. In January 1880, a year after the battle he expanded on an earlier draft and wrote an account of the battle at Rorke’s Drift at the request of Queen Victoria. His account forms a significant part of the historical evidence of what happened on that day. Bandoola Productions is making a documentary about the whole Anglo-Zulu War called Amashinga. For more anecdotes and analysis do follow us. Twitter @amashingafilm. Instagram likewise @amashingafilm

Lots of reports victorious survivors of battles are easier to piece together than very few reports from the defeated. Thus, the history of the defence of Rorke’s Drift is well understood but the complete destruction of the British camp at Isandlwana is not. History is further clouded by a cover up orchestrated by the Army Commander, Lord Chelmsford and his staff, who sought to avoid blame for their various errors. It is hardly central to their cover up but a particular mystery, is what exactly the Zulu Army was doing on the iNyoni Ridge north of the British camp at Isandlwana on the day they attacked the camp, 22 January 1879. Chard was one of the few eye witnesses who can tell us what the British in the camp thought they were seeing. This makes the sale of his papers at Bonham’s on 17 December significant and not just because of his account of events at Rorke’s Drift.

Rorke’s Drift was a crossing over the Buffalo River used by one of the British Army columns which invaded Zululand on 10 January 1879. This central column’s first action was to ‘storm the stronghold’ of Zulu Chief Shiyaho which lay opposite Rorke’s Drift. This was hyperbole on both counts; it was neither stormed and nor was it a stronghold, but it was a skirmish within earshot of Rorke’s Drift. The easy victory greatly encouraged the over confident, Lord Chelmsford whose main concern was that the Zulus would not fight. There was so much baggage in the column that it took a further ten days for the British force to establish its first camp near Isandlwana just ten miles further on.

Meanwhile, as well as chasing the elusive Zulu Army, Lord Chelmsford, had also called up various units to the main camp at Isandlwana. This included Colonel Durnford late RE, now employed as a local militia commander, and also Lt John Chard and his detachment of Royal Engineers. However, it was not clear to Chard whether this meant he should move forward to Isandlwana from Rorke’s Drift with his detachment, or on his own. Thus, at dawn on the fateful day of 22nd January 1879 he rode to Isandlwana to clarify his orders. On arrival there he could not find the officer left in command of the camp, Lieutenant Colonel Pulleine but he did borrow a telescope and observed:

..”.[I] could see the [Zulu] enemy moving on the distant hills, and apparently in great force. Large numbers of them moving to my left, until the lion hill of Isandhlwana, on my left as I looked at them, hid them from my view.”

Most observations from that morning were made by people who then died so their reports are either hearsay or were or later found in notebooks, whereas Chard survived to relate what he saw. The battle picture at that point was very unclear. Those in the camp thought the main Zulu Army was to the south either pursuing or being pursued by Lord Chelmsford with half the available British force. In fact the Zulu Army was hiding undiscovered to the east of the camp (see image above). The debate is whether the Zulu Army had by this time, 9 am on 22 January, already deployed its northern (right horn) to cut off the Isandlwana camp for an attack either that day or the next. In which case Zulu commanders might have already decided to encircle and destroy the camp as contended by some historians. If so then perhaps ‘the apparently great force’ Chard reported may have been the Zulu right horn, thus confirming this theory. Others, contend the Zulu Army was still in its holding area 7 miles away in Ngwebeni Valley from which it raced to destroy the camp at Isandlwana, but only did so when discovered at about 11 am. If this is true then, Chard might have seen strong Zulu command and recce parties on the iNyoni ridge which are agreed by Zulu sources to have been there looking at the camp at about that time. Battlefield guide and consultant to Amashinga, Paul Garner highlights the word “apparently” in Chard’s report. It suggests that despite the use of the telescope he did not confirm the size of the force himself but perhaps assumed it from conversation with others; or perhaps deduced its size from the bits he could see. The Zulus were very skilled at making a small force look like a large one if that is what they intended. There was plenty of alarm in the camp at that time. Indeed at 8.05am Pulleine, who Chard did not meet, had sent a note south to Lord Chelmsford advising him of the threat to the camp.

The exact intentions of the Zulu to the north of the camp seems to have mattered to guardians of Lord Chelmsford’s tattered reputation. If what Chard saw was the Zulu right horn pre-deploying, then the Zulus had carefully planned the destruction of the camp and thoroughly duped a commanding British general with this and other skilful battlefield deceptions. On the other hand if the Zulus only attacked when discovered, Lord Chelmsford lost an encounter battle. In terms of the impact on Lord Chelmsford’s reputation the difference may be slight, given the salient fact that a Zulu Army of 20,000 which was being searched for, hid itself and should have been discovered. (There is a slightly separate debate about whether the Zulus intended the attack on the 22nd or 23rd.)

Another problem with Lt Chard’s observation is evident from my visit to the battlefield and is usefully demonstrated using Google Earth Pro Viewshed feature. Thus shows what-you-can see-from-where (ie reveals dead ground in the military parlance). No matter exactly where Chard was located when he used the telescope he could not have seen into the high ground above the camp. The iNyoni ridge is immediately above the camp to the north and it creates a few kilometers of terrain to its north that is invisible to anyone in the camp. On 22 Jan 1879 there were British look outs on the iNyoni Ridge above the camp. Thus, it is hard to see where Chard would have seen an ‘apparently great force’ of Zulus where they would not have been seen by many others. Nor is it clear why the Zulus, who were very skilled at hiding their troop movements, would have allowed their right horn deployment to be seen. Some argue they showed themselves to intimidate the camp as a precursor to planned negotiations. This is not an unreasonable theory but I cannot see how the ground allowed it. See Map 1 below for more detail.

Fearful this Zulu movement might cut him off from Rorkes’ Drift, Lt Chard then returned to his ferry some 1/2 mile from the Rorke’s Drift store area. There he had lunch and wrote a letter (sadly not in the recent sale of his papers). Then after being warned the Zulus were coming to Rorke’s Drift he moved to take command of the store area where the battle took place. He did so barely 30 mins before the Zulus arrived but made a number of helpful suggestions including building the inner parapet. We should mention the little acknowledged commissary officer Dalton who before Chard arrived had stiffened resolve at Rorke’s Drift and emphasised that only standing and fighting would allow survival. It is further to the credit of all who stood firm at Rorke’s Drift that there was a stream of survivors from Isandlwana who encouraged the defenders at Rorke’s Drift to join their retreat, but of course they did not. The narrative of Rorke’s Drift is well known and Lt Chard more than did his duty alongside men of the 24th and as a result rightly became a romantic and heroic Victorian figure.

The nub of the puzzle is whether Chard’s account to the Queen, delivered nearly a year later, was entirely his own work or whether he was coached on what to say. Chard had produced a shorter version just two days after the battle. It seems a transcript of this later report is in the sale on 17 Dec but by then Chard’s narrative was confined by the fact of his earlier report written a few days after the battle. It seems quite likely Chard was supplied with the means (paper and pen) and inclination to write this earlier report by the staff of Lord Chelmsford. They were very concerned with how the events were reported so it is logical they would have tried to influence the content as well. There was certainly a cover up being constructed on behalf of Lord Chelmsford including falsehoods such as claims Durnford had been told to take command of the camp. Thus, Chard’s papers are not only an eye witness account of events at Rorke’s Drift but maybe the key to one of the puzzles at Isandlwana.

Annex A: Notes on what Lt Chard could see. 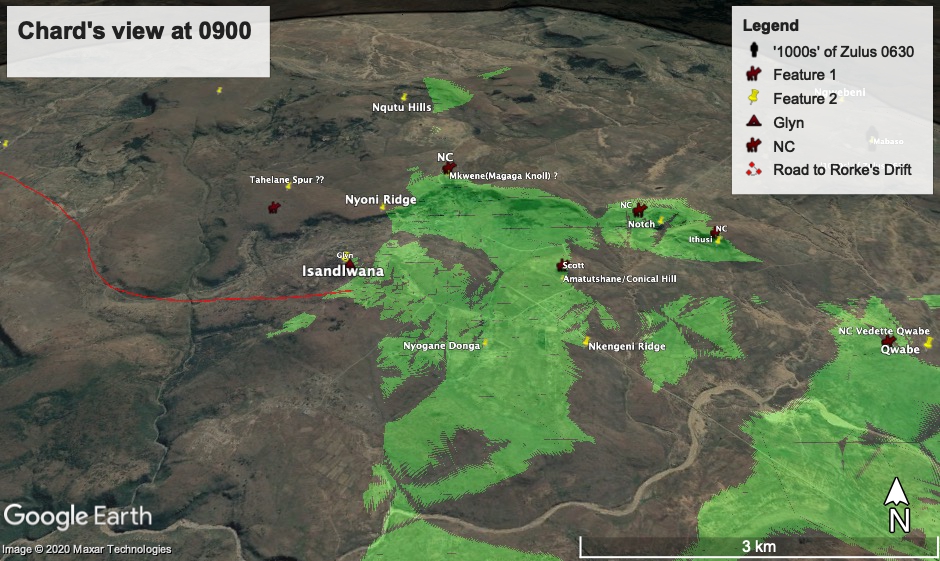 The image shows Google Earth Pros analysis of what Chard could see (in green) from his position. It is not totally accurate but it is a useful analysis tool.

On this assumption Chard is placed on the east of Isandlwana mountain (by the w of Isandlwana in this image) in the camp looking for Pulleine. We do not know exactly where he was but this analysis is based on his mostly likely position. If we move him up the East side of the Isandlwana hill he can see more to his north but not enough to solve the problem we are highlighting.

Clearly, the Zulu movment could not have been south of the Nyoni Ridge. It must have been north of it, but that puts it in ground Chard could not have seen. Most likely he saw glimpses of movement which he then wrote about with more certainty than can have been the case.

It is possible that Chard saw glimpses of movement far away on Nqutu hills but that is hard to reconcile with the force disappearing behind Isandlwana hill which is much closer.

Many claim to know the answer. I do not but it is a fascinating puzzle.